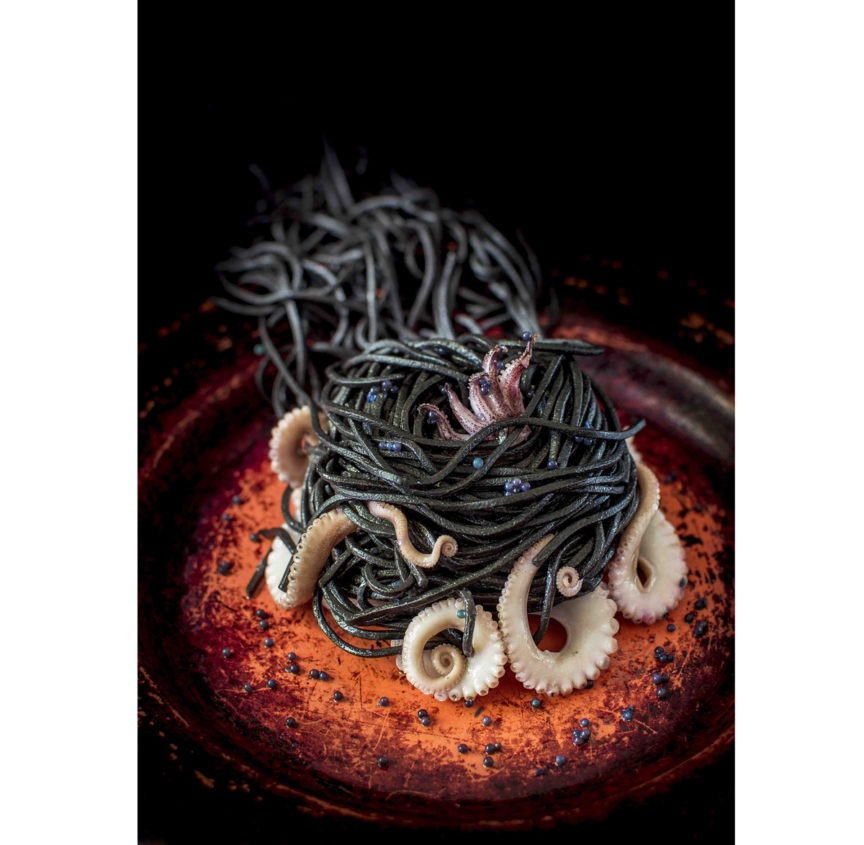 Making a fuss of squid and octopus.

Weird and wonderful, many people can’t contemplate eating octopus or squid, with ideas of rubbery flesh and dubious provenance, and partly famous as they are as a scary creature of the deep, and bearing far too close a resemblance to schlocky sci-fi movie monsters. Yet they are relatively abundant

With good eyesight and a complex nervous system, octopi are considered very intelligent. Not bright enough it would seem to not get caught, judging by the numbers of them strung up in fishing ports around the Mediterranean. They are hung up to dry, which is part of the food preparation, sometimes even including bashing them against a rock to further tenderize them prior to cooking. They have been dried this way for, well, forever, it being both easy and cheap as well as effective. It’s a lack of proper preparation than can lead to chewy food that can put you off these odd critters for life if you’re not careful.

Part of the phylum Mollusca (which also includes oysters, mussels, clams, nautilus, cuttlefish and squid), and the class Cephalopoda (with squid, cuttlefish and nautiloids) the octopus gets its name from its eight legs. In Greek, octo is eight, and podi is legs. Usually called arms, not legs, but often called tentacles, they swim head-first and that head and its soft body, enables them to get through small gaps and spaces.

Most molluscs have the shell on the outside. But cephalopods (which means head-foot, as one leads straight on to the other) have any remaining shell on the inside (apart from Nautilus, which still have external shells). Cuttlefish have a cuttlebone on the inside, sometimes found washed up on beaches, and often found inside birdcages where they are a good source of calcium. Squid have a small internal shell called the pen or beak, while an octopus has none at all.

You can buy octopus whole, buy just the tentacles, or buy baby octopus. Squid comes whole, or just ‘tubes’, which is the main body part, which can be stuffed or sliced into rings, when they are most often battered and fried. Whereas the octopus is all tentacles and not much body, cuttlefish and squid are tentacle-poor and body-rich, yielding a piece of thick, white meat.

Octopus is lower in cholesterol than squid and cuttlefish. All rate as full proteins, cuttlefish are especially high in iron, and octopus has high iron and phosphorous content.

“Known as polpo in Italy, pulpo in Spain and oktapodi in Greece, it’s the Spanish consume the most octopus in Europe but their consumption still falls far behind the Japanese who are partial to tako – eaten as sushi, sashimi, tako sunomono salad or the famous street food takoyaki which are fried octopus balls. The average cookable octopus measures up to 80cm and has eight succulent tentacles, which are each a feast waiting to happen. Octopus flesh is far tougher than the flesh of other cephalopods like squid or cuttlefish so chefs worldwide have come up with different strategies for tenderising the flesh. In the Mediterranean, fishermen beat octopuses against rocks; some swear by cooking it in copper, massaging it with salt or simmering it with wine corks. Some modern chefs have even been known to bag the beast and pop it in a spin cycle in the washing machine! If handled with a little care, such extreme techniques shouldn’t be necessary – gentle simmering should suffice!” – from Great British Chefs.

Cuttlefish are caught for food in the Mediterranean, East Asia, and even the English Channel, among other places. A form of dried, shredded cuttlefish is a popular snack food in East Asia. A little less popular in Europe, there are dishes that use it well, such as risotto with cuttlefish ink from the northeast of Italy, and varieties of black pasta is often made using cuttlefish ink. Spanish cuisine, especially in western coastal regions, uses cuttlefish and squid ink in a variety of tapas and in Portugal cuttlefish is present in popular dishes like cuttlefish in black ink, which is grilled cuttlefish in a sauce of its own ink.

Meanwhile squid are only really of use for their body, or ‘tube’ that gets cut into rings and either fried with other ingredients, or are often covered in a light batter and deep-fried. Squid is often added to sea-stews and can feature in regional seaside favourites like paella.

Octopus, squid and cuttlefish all have the capacity to release a cloud of black ink to frighten off predators. Cuttlefish ink used much more as a dye known as sepia, but these days artificial dyes have mostly replaced natural sepia. Squid, cuttlefish or octopus ink is used in many recipes, such as some of those mentioned above. You can buy a jar of cuttlefish ink from the Fish Society that, they say, “Colours pasta, rice and fingers black as the ace of spades.”

*DV is daily value, or recommended daily allowance (RDA) expressed as a percentage of a basic 2000-calorie diet.

For Email Newsletters you can trust.