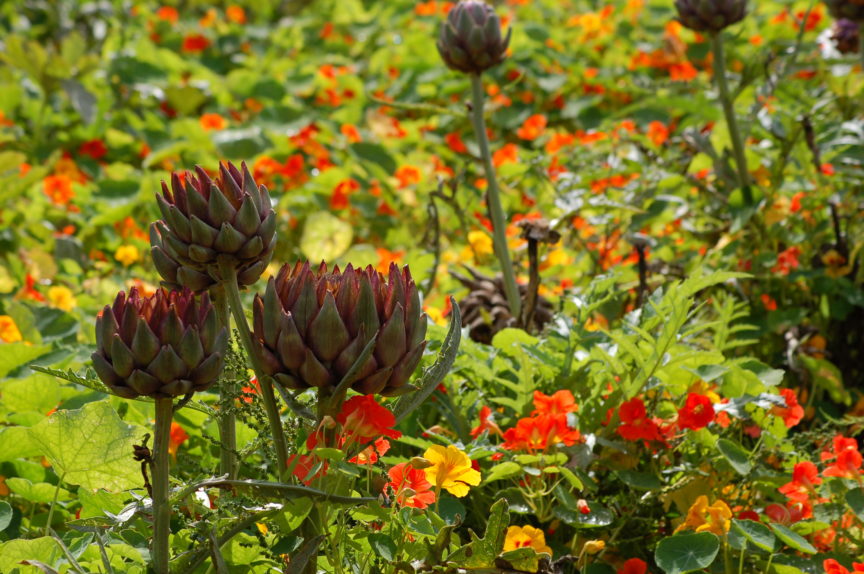 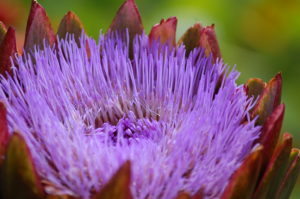 There are two types of artichokes, which oddly enough are not even related to each other. The Globe and the Jerusalem. The globe artichoke is nearing the end of its season, while the Jerusalem is just coming into season.

Globe artichokes are pretty crazy looking plants, available June to November. You either love their huge bristliness or just find them freaky. With long purple tufts sprouting out of their tops around this time of the year, they are a form of giant thistle, but you can eat them. Inside the scaled and pointy globes of the plant is a soft and edible heart. It’s a dramatic plant in any garden, and is a perennial allotment favourite. Getting the heart out is a bit of a faff but worth it for its delicate taste when fresh.

Sophie Conran in Country Living (July 2016) spoke of the artichoke as being one of her preferred seasonal flavours, “It’s a member of the thistle family. We eat just the flower bud, but if allowed to bloom, it will produce thistle-like purple flowers. My favourite way to eat them is trimmed and boiled whole, the fleshy base of each leaf dipped in seasoned melted butter.  Prize off the flesh, discarding the leaf, then remove the choke and enjoy the heart with more butter. The younger buds are fantastic stuffed and braised, or sliced and eaten raw in salad.”

To extract the heart at home, chop the head of the plant off, put it in water and boil it. Then you can pull off the pointy leaves to see the soft heart within. Once you’ve dug the heart out they are easy to preserve for later use by storing in olive oil (and you will find them in shops preserved in glass jars). Commonly grown around the Mediterranean, artichoke is often used in Italian cooking in particular. 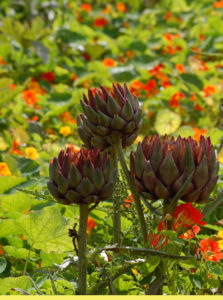 What’s in a name?
Globe artichokes (or just plain artichokes) are not to be confused with Jerusalem artichokes (famously not from Jerusalem, and not actually an artichoke either).

The Jerusalem type, available October to February, is in fact a variety of sunflower with a lumpy, brown-skinned tuber that looks a like a bit of fresh ginger and need to be peeled in a similar way to ginger. The name Jerusalem comes from the Italian word for sunflower, girasole, which seems to have drifted in Jerusalem over time. The artichoke part of the Jerusalem artichoke’s name comes from the taste of its edible tuber. According to Wikipedia, French explorer Samuel de Champlain sent the first samples of the plant home to France when he was in North America, noting its taste was similar to that of an artichoke. It’s possible that in Canada the tuber was known as a sunchoke. The potato-like tubers have nutty, sweet flesh, can be used raw or cooked and are a seasonal winter vegetable.

Jerusalem artichoke contains about 2% protein, no oil, and a surprising lack of starch. It is rich in the carbohydrate inulin (76%). Tubers stored for any length of time will convert their inulin into its component fructose giving it a slightly sweet taste. Jerusalem artichokes have also been promoted as a healthy choice for Type 2 diabetics, because fructose is better tolerated by people with diabetes. It has also been reported as a folk remedy for diabetes. Temperature variances have been shown to affect the amount of inulin the Jerusalem artichoke can produce. When grown in cooler regions it has been shown to produce less inulin than when it is grown in warmer regions.

The art of artichokes

Excerpt from an article by Anna Pavord published in The Independent (still available online) in Feb 2015.

“While the globe is all drama and delight, the Jerusalem is neither an artichoke, nor from Jerusalem. It’s odd that the same name, artichoke, should have been given to two such completely different vegetables. The globe artichoke looks as though it has been sculpted by the builders of the Parthenon; the Jerusalem artichoke has no drama at all. Of the one, we eat the flower buds; of the other, a knobbly underground tuber. They taste entirely different, too. Jerusalem artichokes are tough, hardy plants belongs to the sunflower family and that’s how it got its name: girasole is the Italian word for sunflower and somehow the word drifted to become Jerusalem instead. It’s the tuber hidden underground that is the edible part. They can be very misshapen and difficult to peel, which is why I always favoured a variety called ‘Fuseau’. It’s less knobbly than other kinds, so you waste less when you are preparing it. The globe artichoke has all the dramatic credentials to be the star and centrepiece of a vegetable plot. It has superb foliage, greyish-green and jagged, and the flower buds are held showily on fat, sturdy stems. It looks stunning from late May to October.”

Food features and recipes like this appear in the Desang Diabetes Magazine, our free-to-receive digital journal. We cover diabetes news, diabetes ‘kit’ and information on food suitable for maintaining good blood glucose control or a diabetic diet, including a regular Making Carbs Count column. It’s free! Go to the top of this page to sign up – we just need your email address. See current and past issues at