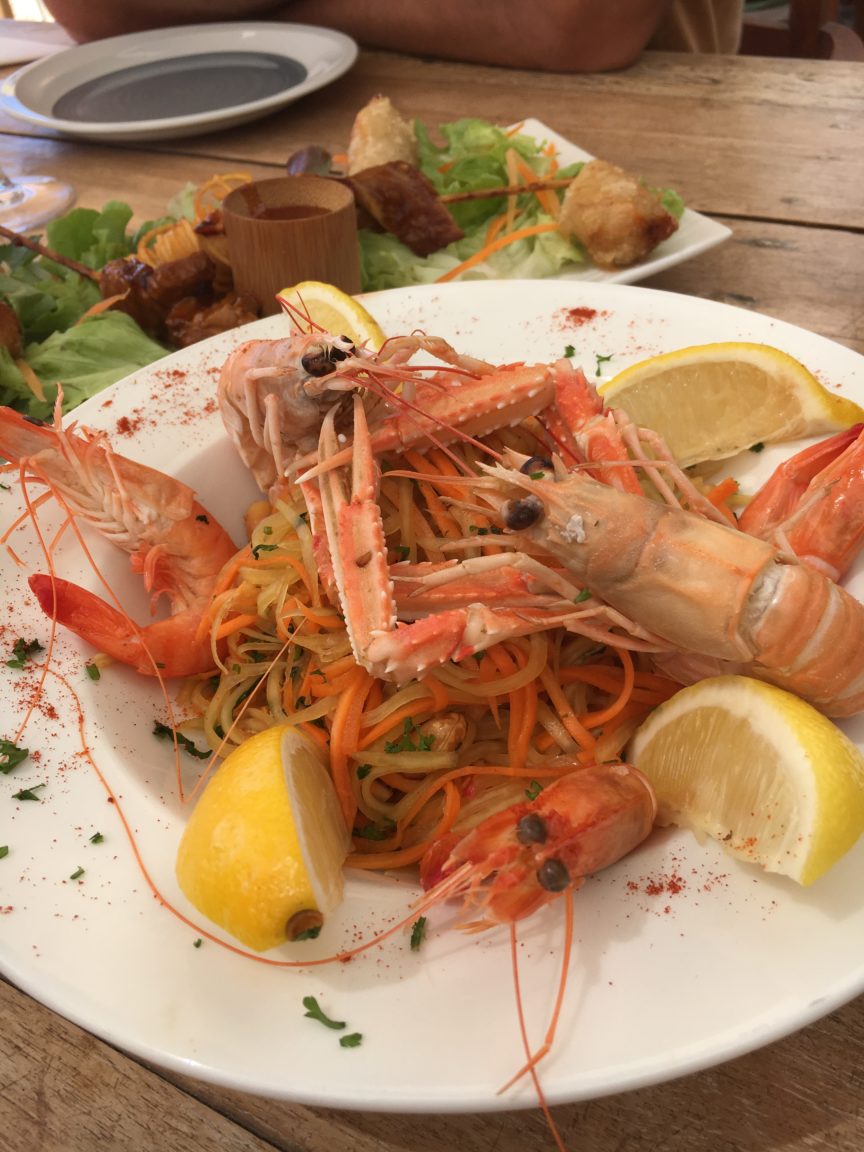 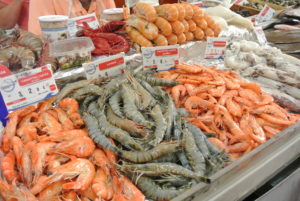 Crabs, lobster and langoustine are in their prime in summertime.

Pincers, grapplers, claws – scary stuff from the beneath the waves, but full of protein, which fills you up with almost no fat or carbs. The bigger shellfish are a good options for health eating especially in the summertime when they are in season and memories of heavy stews are stored away for wintery months.

Watch out if you are near any of these critters when they’re alive and unbridled. They can give you a nasty nip!

With claws for paws, crabs are in full season now, having become available in April and will be around until November. Crabs are very greedy and quarrelsome, which is why we might say someone is being crabby to this day. But why do the walk that way, scuttling sideways across the seashore and seabed? “Crabs walk sideways because that’s the way their legs bend, leting them squeeze into holes and crevices to keep out of the way of fish with sharp teeth and larger crabs that might think the crab was a tasty meal. All crabs have ten legs, two of which have developed into very large and powerful claws, used for grasping their food and fighting each other. Cancer pagurus is the red or brown crab that fishmonger’s sell for eating. The crab has a wide oval shell with a pie-crust edge. This crab will crouch under rocks, buried completely or with the top of their shell just visible. They are found low down on the shore near the sea, but do not collect them, as crabs must be allowed to grow big enough for eating. The claws of the Edible Crab are very strong, so it can crush open a mussel or a sea urchin.” — From Crabs Of The Seashore Of The British Isles, by Andy Horton & Jane Lilley. 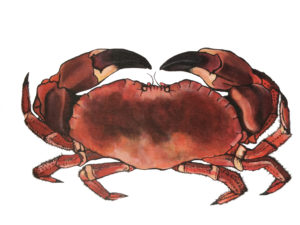 The Marine Conservation Society describes Cancer Pagurus as, “The Brown crab, also known as edible crab, is the heaviest British crab and looks a bit like a pie on legs with its distinctive reddish-brown shell and pastry crust rim. The vast majority of brown crabs in the UK are caught by potting. This is a low impact and relatively selective method of fishing, any bycatch or discards can be returned alive to the sea with high survival rates.”

For preparation, according to BBC Good Food: A crab is a crustacean that has its skeleton on the outside protecting a soft, flavoursome flesh. There are many varieties of crabs. The most commonly eaten crab in the UK is the common edible or brown crab that weighs up to 3kg and contains plenty of sweet, succulent flesh. Female crabs have sweeter flesh than males. Choose crabs that feel heavy and don’t have liquid sloshing around inside them. It is considered humane to place them in a freezer for at least 2 hours before cooking, so they become comatose and die. However, the method is only humane if done quickly in a large freezer at a temperature of -18C. Remove the crab from the freezer and plunge into a pan of salted boiling water, bring it back to the boil and cook it for 30 minutes per kilo, cool rapidly, then dress. It is vital you remove the grey gills from the body, called ‘dead man’s fingers’ as these are very tough and indigestible Fresh crabs should be eaten immediately. Alternatively, freeze cooked crabs and use within three months. 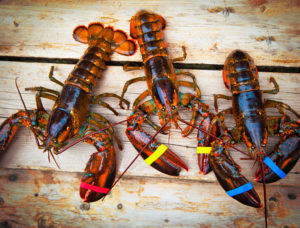 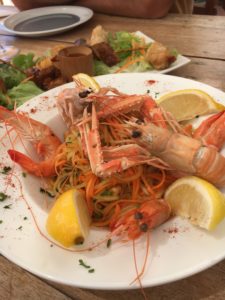 LANGOUSTINE
Also known as Dublin Bay Prawn and Norway lobster (it’s latin name is Nephrops Norvegicus), langoustines are often underrated. Caught in wicker creels (or baskets) and readily available in UK waters, they are often exported to Europe. It’s their tails alone that became that firm fish shop favourite, scampi. Langoustine heads, reserved from making scampi, can be used to make fish stock or a base for a classic bouillabaisse soup. 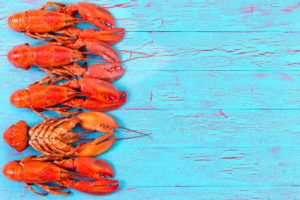 Lobster and crayfish
The meat from a hard-shell lobster is low in fat and carbohydrates while being high in protein, having less saturated fat, calories and cholesterol than many of our lean favorites (pork, extra lean beef, and white chicken meat) and less than 100 calories per serving. Not that easy to get hold of and generally pricey, it’s still a treat on all fronts, contains negligible saturated fats, less even than turkey (light meat), which is known for being low-fat. The level of cholesterol for Canadian Atlantic Lobster (in particular) is only slightly higher than salmon and turkey. Lobster meat contains Omega-3 fatty acids too, which are often touted as being very important for a healthy diet, and in short supply in general. Crayfish are the smaller, freshwater relations of lobsters, and can be compared to the meat and flavour of a sweet langoustine and have a similar nutritional profile as lobster.

The Good Fish Guide from the Marine Conservation Society.