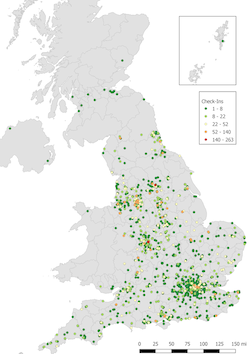 As non-essential businesses reopened in England for the first time since lockdown restrictions were imposed in January 2021, new track and trace data reveals the region where the most number of people flocked to their local pubs, bars, restaurants and cafes on the first day of trading (12 April). Of nearly 18k hospitality venue check-ins, one-in-three were made by people in the South East (32%). This was followed by the North West (19%), and Yorkshire (13%). The data has been gathered by hospitality tech platform Airship.co.uk, through its track and trace solution useTrck.to. The company has over 11,000 venues across the UK, including Wetherspoons, Costa Coffee, Pret, Greggs and Cafe Nero. Other areas to mobilise included the Midlands (12%), South West (12%), East Anglia (8%) and the North East (4%).

Dan Brookman, CEO of Airship, said: “It was an amazing day despite the snow flurries, and the feedback from operators was that customers were delighted to be back – it more resembled a Sunday in July than a Monday in April. Consumers know what to expect this time around and there was far less strain on the venue teams than previously, even with more stringent guidelines to follow.”