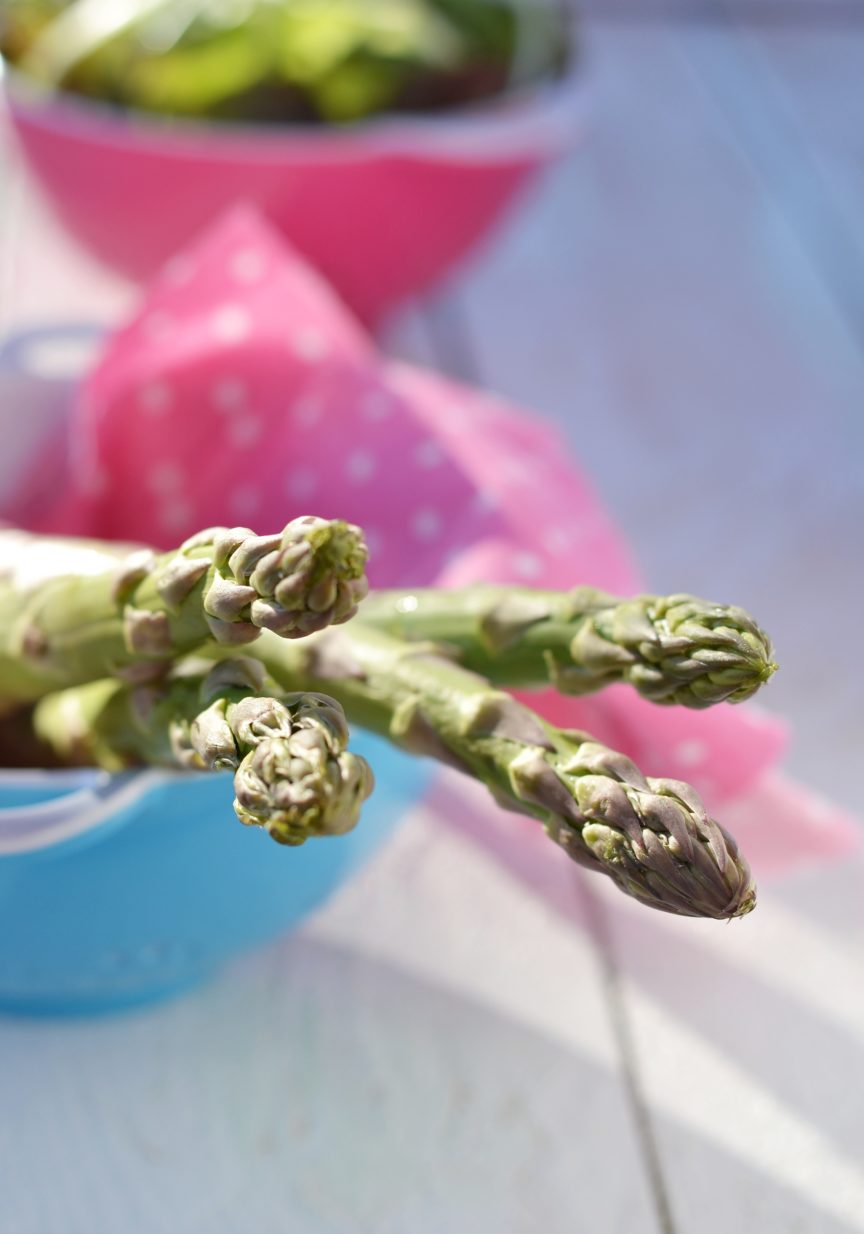 British asparagus can be traced back to Roman times (1st Century AD) Because asparagus is a naturally grown crop, growing in the notoriously fickle British climate, the time at which it makes its first appearance each year is always a subject for much speculation. Asparagus growers generally say that the season lasts from St George’s day on 23rd April for two months, to end June.

Each asparagus spear is about 1g of carb, so 10 sticks would be 10 carbs. It’s also very low calorie — until you put any butter on it, or hollandaise sauce – it’s about 4 cals per spear.  A 1-cup serving of asparagus contains:

The iron content is also high in asparagus, which is rare with most vegetables. A 1-cup serving accounts for 16% of the recommended daily value.

Asparagus grows from ‘crowns’ planted in the ground It takes each crown three years to produce harvestable asparagus. An asparagus crown has an active life of around 15 years, although asparagus growing commands respect and is a labour of love. Investment of time and patience is required, combined with the acceptance of a high quality but low yield, which is why it can be a bit pricey.

Asparagus spears differ in size and weight because they’re hand grown and individually cut. Look for firm, green spears with tight, crisp tips when you’re shopping for asparagus. You can keep asparagus fresh by placing it in the salad drawer of the fridge. It should always be stored in the dark. Allow 8-10 medium size spears per person for a starter or 4-6 as a side dish. Depending on the size of your asparagus, cooking times can vary between 3-6 minutes. Simply test if cooked by testing if the tips are tender with the point of a knife or skewer. To prepare, do give it a wash first, then trim any white ends or peel with a vegetable peeler.

Asparagus is a cure for indigestion and has also been recommended as a mild sedative. It comes in green, purple, white varieties. The white variety (mainly grown in European) is grown in the dark to stop any colour developing. The vast majority of British asparagus is green.

Eaten regularly, it’s claimed that asparagus can help you beat cancer and heart disease while boosting your immune system. It contains high levels of vitamin A, folic acid and dietary fibre all believed to play an important role in the fight against cancer (recent research has shown that a diet high in fibre is linked with a lower incidence of bowel cancer). Asparagus is also rich in soluble fibre, known to have a protective effect against degenerative heart diseases. Asparagus also contains high levels of potassium, which may help to control blood pressure while also being low in fat and sodium, also good for heart health. It’s also a source of iron, which boosts the immune system and prevents anaemia.

Asparagus is a mild diuretic and is believed to help detoxify the body, helping it to get rid of excess water and combat cystitis. Asparagus contains prebiotics, which selectively stimulate the growth of friendly bacteria in the gut, soothing the stomach and aiding digestion. The levels of vitamin C and E present even make it great for skin, nails and hair.

British asparagus is hailed as the best in the world, so make the most of it as it comes into season. Traditionally served simply steamed or lightly boiled, it can also be roasted, chargrilled, barbecued or stir-fried. Or eat it raw, in a fresh and light spring salad.

News items and features like this appear in the Desang Diabetes Magazine, our free-to-receive digital journal (see below). We cover diabetes news, diabetes management equipment (diabetes ‘kit’ such as insulin pumps and continuous glucose monitoring equipment) and news about food suitable for a diabetic diet including a regular Making Carbs Count column. We just need your email address to subscribe you (it’s free, and you can easily unsubscribe should you wish to).